The costs of rooftop solar continue to come down. Particularly the costs of photovoltaic modules and some of the other hardware associated with them. The other costs of solar, the so called soft-costs—things like permitting, interconnection and maintenance fees, have largely stayed the same. That’s what the Department of Energy’s Rooftop Solar Challenge is tackling and yesterday (Nov. 6) it announced a new round of award winners that will use the awards to reduce the soft costs of solar locally.

“Today, solar modules cost about one percent of what they did 35 years ago, and permitting and interconnection are an increasingly large portion of overall solar system costs,” said Energy Secretary Ernest Moniz, in announcing the new round of funding for the program. “Through the Rooftop Solar Challenge, the Energy Department is helping to make the deployment of solar power in communities across the country faster, easier and cheaper—saving money and time for local governments, homeowners and businesses.” 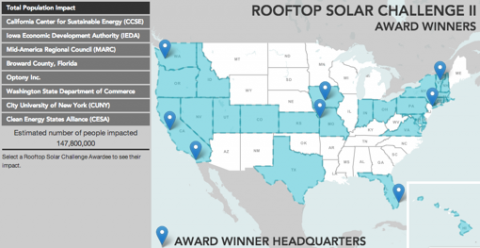 The new, $12 million, round of funding will make it easier for a majority of the U.S. population (147.8 million people) to put solar power on their roofs, the DOE said. The new awards are to eight teams covering a broad range of states from California and Texas to New York. “These awardees will develop and replicate creative solutions that help standardize complicated permitting and interconnection processes that often vary from jurisdiction to jurisdiction; facilitate easy, cheaper bulk purchasing; and support user-friendly, fast online applications,” DOE said.

In the past the Rooftop Solar Challenge, part of the larger Sunshot Initiative, has funded such projects as Colorado’s Solar Friendly Communities. That voluntary program is helping an increasing number of communities in Colorado reduce the amount of time spent waiting for permits and costs associated with permitting, among other things. The program has also helped launch Solarize campaigns in numerous states like Connecticut and Massachusetts. The campaigns use the power of group purchasing to bring down the costs of solar power in a neighborhood.

“During the competition’s first round, regional teams worked to dramatically reduce the soft costs of solar in 22 communities across the nation,” DOE said. “These efforts helped cut permitting time by 40 percent and reduce fees by over 10 percent—opening the door to make it faster and easier for more than 47 million Americans to install solar.”