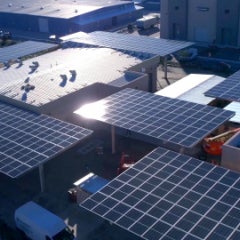 The quickest way to grow cannabis is under artificial lights and in a warehouse where growers can control all aspects of the climate through the grow’s lifecycle. Now, California based Canndescent said it’s the first weed-growing facility that’s powered by solar panels in the US.

The company is using a 282.6 kilowatt solar array installed across seven carport structures at its cannabis production facility in Desert Hot Springs. Though the project was completed in just eight weeks, due to the dubious nature of cannabis in the federal US legal system, it took the company two years to get project approval and financing. 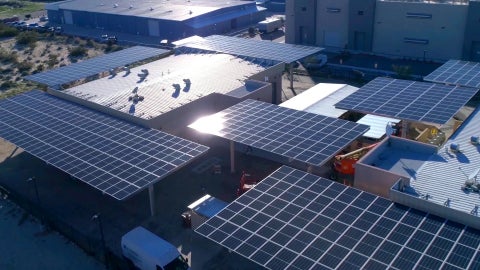 “We commissioned the solar project because the modern consumer deserves and demands that we create exceptional products using exceptional practices,” Canndescent CEO, Adrian Sedlin said. He added that the company saw the installation as a natural progression of its business model and that it wanted to lead the way toward cleaner energy in the industry.

The company introduced the system as part of a bigger effort to, well, green its grow, which it calls greendoor. The system combines water efficiency, energy efficiency, and pesticide-free growing in an indoor format to make a grow as efficient as possible.

“Given the restrictions around cannabis banking and lending and the complexities of energy projects and California civil construction in general, this was extraordinarily difficult to pull off. Nevertheless, we got it done and have established a template for the ‘green industry’ to go greener,” said Canndescent Chief Compliance Officer Tom DiGiovanni.

It’s not just pot that can benefit from solar power to run indoor grows, either. A few years ago a system in Alaska was built to benefit 11 native villages, giving them access to fresh produce grown in a trailer year-round. That system uses photovoltaics and solar water heating to run its operations so it doesn’t tax the local electric grid. Other efforts are using solar to power the growth of crops as well.

In Canndescent’s case it invested $3.75 million to retrofit its 11,000 square foot warehouse for greendoor strategy. It grows roughly 10,000 pounds of boutique cannabis at the facility, creating jobs in a low-income area.

“Since inception, Canndescent has lifted up our community contributing $500,000 in local cannabis taxes and creating 150 jobs. Adding renewable energy to what was the first cultivation project to open in the Coachella Valley, Canndescent continues to light a path for others to follow,” said Scott Matas, Desert Hot Springs’ mayor.

Looking ahead the company aims to release a open source white paper about the project in the second quarter outlining the project, allowing other growers to use the plan.