The sleek new home of the Atlanta Falcons, Mercedes-Benz Stadium, is the latest NFL stadium that’s shining under the power of the sun as more than 4,000 solar panels are now powering the stadium and parts of the nearby neighborhood. The roughly 1.3 megawatts (MWs) of solar power is part of the stadium’s efforts to seek LEED Platinum certification.

"The renewable energy and solar program at Mercedes-Benz Stadium is a great example of our commitment to lead the sports industry in terms of sustainability and environmental responsibility," said Scott Jenkins, general manager of Mercedes-Benz Stadium. "Our goal is to collect enough renewable energy each year to power more than nine Atlanta Falcons home games and 13 Atlanta United home matches and with the solar program we have in place we feel confident we'll achieve this and more." 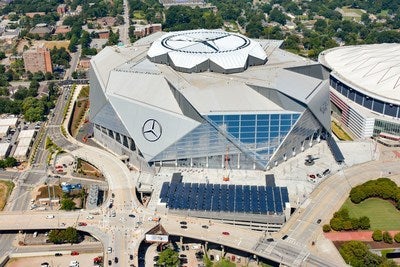 The system was installed by Georgia Power, the stadium’s official energy partner. The utility, one of the stadium’s founding partners, began working on the stadium’s energy efficiency and sustainability measures in 2014. Solar panels are installed on three locations at the stadium, the Georgia World Congress Center Silver Deck, a surface parking lot and atop stadium entry gates and administrative and VIP parking. The three solar installations across the stadium campus are expected to generate 1.6 million kilowatt-hours of electricity in its first year of operation.

"Georgia Power continues to be a leader in energy innovation, including expanding cost-effective solar generation across our portfolio, paired with forward-looking research and development efforts," said Wilson Mallard, director of renewable development at Georgia Power. "As we build the future of energy, our partnership with Mercedes-Benz Stadium helps to educate and illustrate the growing role of solar as part of a diverse energy mix for millions of stadium guests every year."

The stadium is the latest to go solar. NFL stadiums from the Washington, DC, team's FedEx Field to the New England Patriot’s Gillette Stadium are incorporating solar. In fact, for at least the past two years, the Super Bowl has been played at stadiums with solar power. But the biggest installation at a sport venue actually is the 9 MW system installed at the Indianapolis Speedway.

The solar power at Mercedes-Benz Stadium use a number of technologies, including bifacial solar panels that can capture sunlight from above as well as sunlight reflected off the asphalt. Others include clear-backed, translucent solar panels. The stadium will use the renewable energy credits (REC) that the solar installations produce to help the stadium achieve LEED Platinum.