It’s being called the largest single photovoltaic power plant in the world and NRG Energy, Inc. and partner MidAmerican Solar said the 290 megawatt Agua Caliente Solar Photovoltaic Facility is substantially complete today (April 29). The new facility, which was designed and constructed by First Solar, is on  2,400 acres of land between Yuma and Phoenix, Ariz., and will provide enough power for 230,000 homes at peak capacity.

That’s good news for customers of Pacific Gas & Electric Co. who will use the solar electricity generated at site under a 25-year power purchase agreement PGE signed with NRG and MidAmerican. “Large-scale utility accomplishments, like our Agua Caliente project, raise the bar in terms of our clean-energy technology and production,” said Tom Doyle, president, NRG Solar. 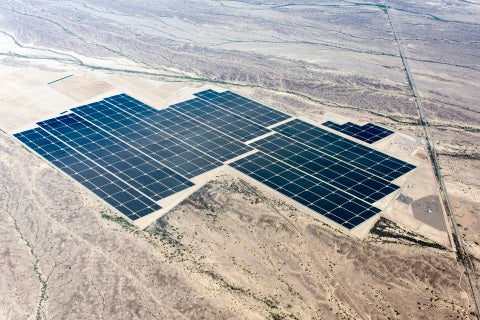 NRG is no stranger to solar. It also co-owns the Ivanpah Solar Electric Generating System with Google and BrightSource Energy. “Proving that we can build both the world’s largest solar thermal and now one of the world’s largest solar photovoltaic facilities advance NRG’s mission to reshape the energy landscape that is incredibly beneficial to both the economy and in how we produce and consume energy,” Doyle said. “Whether it’s partnering, developing or investing, NRG will lead the way in providing a diverse set of solutions and technologies to get the U.S. to the ultimate goal of providing affordable, reliable clean energy for everyone.”

NRG also offers solar power to homeowners in certain markets, so it’s not just tackling solar on a large-scale. In all, its investment in solar power is among the largest of all energy companies in the U.S. Agua Caliente is the largest of the 10 utility-scale solar PV facilities NRG has a stake in.

MidAmerican Renewables, for its part, previously invested heavily in wind power, but more recently started investing in solar projects as well. The group is majority-owned by Warren Buffett. “In 2012, our company made a commitment to invest in its first utility-scale solar project to foster economic development while demonstrating our commitment to the environment,” said Richard Weech, chief financial officer, MidAmerican Renewables, who also oversees the activities of MidAmerican Solar. “It is exciting to see this project become fully operational and begin to realize the full benefit of emissions savings with the clean energy generated at Agua Caliente.”