Rooftop solar is taking off across the U.S., and it’s starting to scare the utilities. Over the past few years, utility companies have increased efforts to rescind or dismantle state-level policies, like net-metering, which have helped homeowners go solar. Now, rooftop solar companies including SunRun, SolarCity, Sungevity and Verengo recently forged The Alliance for Solar Choice (TASC) in response to attacks on net-metering policies across the U.S.

SunRun Vice President, Public Policy & Power Markets Bryan Miller, a former Vice President of Energy Policy for Sustainable Energy at Constellation—a utility in Maryland and part of Exelon—discusses with SolarReviews how and why utilities feel threatened by net-metering and distributed generation policies. This perceived threat exists, despite proof that net-metering policies are good for rate payers; and residential solar leasing and rooftop solar installations are good for just about everyone. 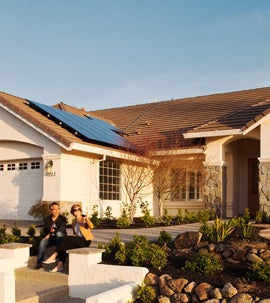 The conclusion of two recent studies, one in California, the other in Arizona (both by Crossborder Energy) have shown that net-metering benefits electric customers. “I think the conclusion of both studies is that the utilties have not shown that any net metering program costs rate payers. In fact they find that it's a benefit to rate payers,” Miller says.

For example, the May 8 report, The Benefits and Costs of Solar Distributed Generation for Arizona Public Service, found that the benefits of distributed generation (DG) exceeded the costs in both the residential and commercial markets (each market was measured individually). “Based on SAIC’s projection of 431,000 MWh of incremental solar DG in 2015, these benefits amount to $34 million per year for APS’s ratepayers," it stated. That’s not just APS customers with solar, but all of its customers.

“That doesn't necessarily mean their rate of returns go down. It just means that they're growing slower than they'd like. That's good for everybody except the utilities,” Miller says. “That's why they've made it a coordinated attack to do everything they can to stop not just solar but efficiency, conservation,” he asserts, referring to a recent Edison Electric Institute (EEI) report, which contends that solar and net-metering is a disruptive technology that threatens monopolistic utilities.

“I think what's driving the net-metering debate from their point of view is we're competition, and utilities don't like competition. They have spent their entire existence without competition … for the wires side of the business and what we're doing is undermining the case for the next multi-billion transmission project that they want to build,” Miller says.

“It’s a great thing for rate payers if that doesn't have to get built, but a bad thing for utilities,” he says. Utilities are able to pass those costs along to the customer as well as charge them for maintaining and building the infrastructure. Hence, energy companies like APS, Pacific Gas & Electric in California, and CPS Energy in San Antonio, Texas are ramping up efforts to reduce or end net-metering programs. Some attacks are public, like op-eds, where executives claim that net-metering costs all customers more. Others, like APS’ recent attempt to end its net metering program in a regulatory filing, are more insidious.

“We're working to educate policy makers to talk about the benefits of DG and calling the utilities out for their repeated blatant misrepresentations about net-metering,” Miller explains. “The truth is not on their side in these debates and they continue to stretch the truth and abuse the truth in every one of these proceedings.”

1 Comments on “Bryan Miller, SunRun VP on Net-Metering Attacks and How Rooftop Solar Fights Back”