The name SunCredit sounds like it should be a solar-friendly policy. But sun-loving denizens of San Antonio, Texas, apparently weren’t happy with it and, led by Solar San Antonio, forced the local utility CPS Energy to shelve the controversial program, which would have reduced the incentives it paid to solar energy producers.

At the heart of the issue was CPS Energy’s plan to change its net metering program, cutting the rate it paid for net-metered systems by almost half starting this November. On April 9, CPS Energy, a municipal utility, said under SunCredit the rates it paid for net-metered systems would have dropped from 9 cents per kilowatt hour to 5.6 cents per kilowatt hour, to start. As Vote Solar’s Annie Lappé, solar policy director, put it in a piece that appeared on Greentech Media: “With this proposal, CPS is making solar users mini-solar wholesale generators that must sell all their resources to the utility. Essentially, it takes from San Antonians the right to reduce their electricity bill by installing solar energy on their roofs.” She added, “Second, the price that CPS is offering to pay these new mini-wholesale generators is far less than what the solar generation is worth.” 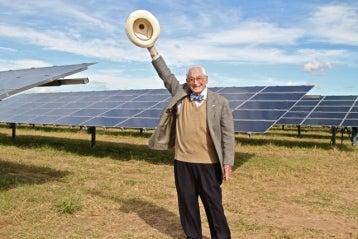 The utility planned to implement the new policy in less than a month after announcing it. Although this hardly gave the community time to respond—it did—did, led by local solar advocacy organization Solar San Antonio. “The introduction of CPS Energy’s SunCredit Program as a replacement for net metering set off an intense month of activity. Existing solar customers rejected the idea that CPS Energy could alter the terms under which they made their decision to purchase solar,” the organization said. “Solar installers calculated that the low proposed solar credit would put them out of business.”

The organization sent a letter to the mayor’s office requesting that the program be delayed for at least a year and encouraged citizens to participate in a city council meeting. Prior to the meeting, 50 people signed up to protest the implementation. “On May 3, even more people showed up to voice their objections at the CPS Energy public gathering,” the organization said.

CPS Energy got the idea. On May 8, CPS Energy agreed to withdraw the SunCredit Program for one year, grandfather all applications coming in during that year into the net metering program, and establish a dialogue between the solar industry and CPS Energy to explore solutions to the many issues raised by the SunCredit controversy, reports Solar San Antonio.

Now CPS Energy will work with the Texas solar advocacy group along with other members of the solar industry to create a solar policy that meets the needs of all. “The goal will be to develop a program that fairly addresses the issue of integrating distributed generation of solar into CPS Energy’s grid and business model,” the utility company said.