The US wind industry added nearly 15,000 jobs in 2016, reaching 102,500 jobs across the US in 2016. That’s according to the 2016 U.S. Wind Industry Annual Market Report from the American Wind Energy Association (AWEA), which came out earlier this week. 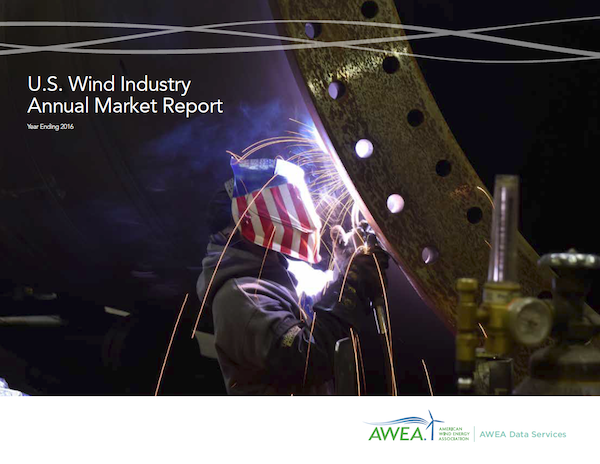 “By building new wind farms we are investing in rural and rust belt America,” Kiernan stated. Indeed, the industry is expecting strong jobs growth over the next few years. Citing recent research from Navigant Consulting, AWEA said that by the end of President Trump’s four-year term, the wind industry will support over 248,000 jobs.

Last year the wind industry installed more than 8 gigawatts of new wind turbines for the second consecutive year, bringing the total US wind power generating capacity up to 82.1 gigawatts of electricity. That represented investments of $14 billion in 2016.

The growth in jobs and the installation of wind power is undoubtedly impressive, but solar power has outpaced even that growth. Earlier this year, The Solar Foundation’s National Solar Jobs Census 2016 showed that the solar industry employed 260,077 people in the US at the end of 2016. Similarly, the installation of solar power in the US outpaced wind power as well. The U.S. Solar Market Insight Report issued by GTM Research and the Solar Energy Industries Association (SEIA) found that solar industry installed 14.6 gigawatts of new energy across the country in 2016. Still, with only 42.4 gigawatts of solar installed, it still has a lot of catching up to to do with wind.

“Wind power is a critical component of an all-of-the-above energy approach focused on reducing consumer costs, furthering advances in renewable technologies, and moving our country closer to total energy independence. I will continue to support policies that further a comprehensive approach to improve our country’s energy outlook and ensure that American wind production remains a key component of that strategy,” said Minnesota Representative Tom Emmer (R), in a letter of support.

Both wind and solar power have made phenomenal gains in efficiency, quickly reducing costs of the energy technologies, which is helping them quickly become an important part of economic and employment growth in the US and an important source of energy in the country. “Bigger, better technology enables new wind turbines to generate 50 percent more electricity than those built in 2009, and at 66 percent lower cost,” Kiernan said. “With stable policy in place, we’re on the path to reliably supply 10 percent of U.S. electricity by 2020.”

Industry and utilities are picking up on those lower costs as well. Utilities are continuing to add more and solar as part of their energy mix while major US companies like General Motors, 3M, Target and more are investing in wind projects or signing long-term power purchase agreements that offer lower energy prices for a longer period of time than fossil fuel-based electricity can promise.