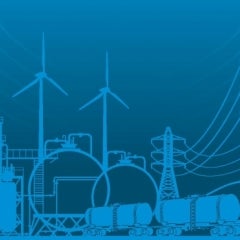 Yesterday (April 21) the U.S. Department of Energy released the first Quadrennial Energy Review (QER) of the U.S. Energy Infrastructure. The review looked at the entire energy infrastructure including rail, petroleum storage, pipelines, electric grid and generation across the nation. It found that there’s a lot of work to be done. The news was welcomed by renewable energy industries.

The new report is a result of a Presidential Memorandum that ordered the administration to conduct a review into aspects of the country’s energy infrastructure every four years. The inaugural review was designed to identify threats, risks and opportunities for U.S. energy and climate security.

Upon the release Vice President Joe Biden said: “We need a 21st century energy infrastructure—and this report offers a roadmap on how to do that.” Biden announced two new executive actions in response to the report. The Department of Agriculture will support six new rural electric-infrastructure projects, which will include investments to support solar energy. The projects will include $72 million in funding. He also announced the DOE will launch a Partnership for Energy Sector Climate Resilience with 16 companies, including major utilities, to strengthen the grid and prepare it for more renewable energy and resilience.

Johnson added: “For renewables in particular, the grid doesn't exist in many places which offer the best solar resources—or what infrastructure does exist is already committed to other generation sources. “We agree with the findings of the Quadrennial Energy Review that a top priority should be placed on modernizing America’s electric grid to better accommodate renewable energy sources and the growth of distributed generation, such as rooftop solar.”

The American Wind Energy Association agreed. “The report also highlights how operating reforms would let us use the existing grid more efficiently, again benefiting consumers and enabling the integration of more renewable energy,” said AWEA CEO Tom Kiernan. “Wind energy is ready to scale up now, with another recent Department of Energy report showing we can double wind-generated electricity in the next five years.…By adding more transmission, as today’s report recommends, we can tap more of this made-in-the-USA supply of energy. Such grid upgrades more than pay for themselves by reducing electricity costs and improving electric reliability for consumers.”

Both organizations renewed their calls for extensions of tax credits which have helped make their respective technologies more affordable to consumers and investors.