The controversial decision by President Donald Trump (R) to remove the US from the international Paris Agreement on climate change is having more interesting repercussions as much of the country expresses support for the agreement. Earlier this week over 1,200 signatories—from governors and mayors of states and cities to leading businesses like Google, Apple and Microsoft publicly declared their intent to adhere to the Paris Agreement and have issued an open letter to the international community and created WeAreStillIn.com to show their support of the agreement.

The World Wildlife Fund (WWF) helped support the initiative. "US leadership on climate change doesn’t begin or end in Washington. Focusing on last week's disappointing decision by President Trump misses the bigger story – America is still in this fight,” says Lou Leonard, senior vice president of climate and energy at WWF. "American companies, cities, states, colleges and universities are banding together to help meet US targets under the Paris Agreement. And it’s not just Fortune 500 companies leading the way. From hundreds of small businesses on Main Street, to cities from Louisville to Pittsburgh, and schools from Arizona State to Ohio State, these American leaders are using their economic and political influence to shift the United States to clean energy and send a clear message to the world: the United States is committed to climate action and delivering on the Paris Agreement." 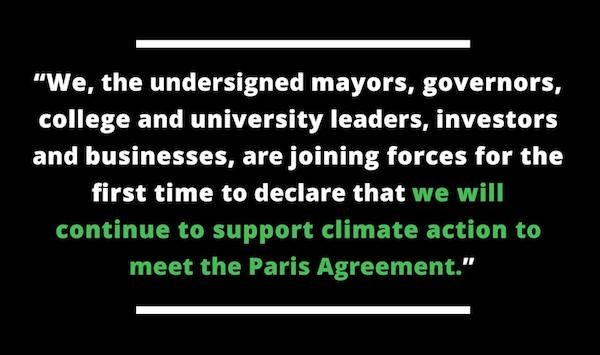 “The President’s decision to withdraw from the Paris agreement does nothing but motivate us even more to make responsible decisions on behalf of our planet,” says Steve Benjamin, mayor of Columbia, SC. “Columbia is still committed to finding innovative solutions for renewable energy and protecting the natural resources that we already have. As one of dozens of Mayors for 100% Clean Energy, I know we have the leadership and innovation to ensure our country does not lag behind in the midst of an incredibly important issue.”

The letter states: “We, the undersigned mayors, governors, college and university leaders, businesses, and investors are joining forces for the first time to declare that we will continue to support climate action to meet the Paris Agreement.” It goes on to say: “The Trump administration's announcement undermines a key pillar in the fight against climate change and damages the world's ability to avoid the most dangerous and costly effects of climate change. Importantly, it is also out of step with what is happening in the United States.”

The letter contends that local and state governments, along with businesses are the primary drivers of reduced greenhouse gas emissions. It also explains that each of the signatories will multiply and accelerate their emission reductions in the coming years.

“In the absence of leadership from Washington, states, cities, colleges and universities, businesses and investors, representing a sizable percentage of the U.S. economy will pursue ambitious climate goals, working together to take forceful action and to ensure that the U.S. remains a global leader in reducing emissions,” it states. Indeed, the signatories say they represent 120 million US residents and $6.2 trillion of the US economy.

The signatories contend that reducing emissions is good for their residents as well as for their companies and their bottom line. For instance, Brad Smith, president and chief legal officer of Microsoft states: “We remain steadfastly committed to the sustainability, carbon and energy goals that we have set as a company and to the Paris Agreement’s ultimate success. Our experience shows us that these investments and innovations are good for our planet, our company, our customers and the economy.”