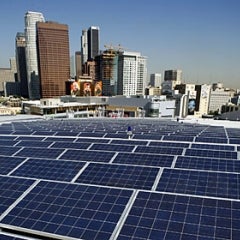 Guest blog by Jim Jenal, Founder and CEO of Run on Sun

Drive the freeways, ride the train from San Diego to Union Station, or fly into LAX and you cannot miss the obvious—Los Angeles has tremendous, untapped potential for solar growth.  Now a new report from Michelle Kinman at the Environment California Research & Policy Center, seeks to layout the case for Solar in the Southland: The Benefits of Achieving 20 Percent Local Solar Power in Los Angeles by 2020. Here’s our take.

Potential as Far as the Eye can See

It is beyond dispute that there is a huge gap between the amount of solar that could be supported in the Southland versus the amount that is actually, presently installed. As Ms. Kinman’s report makes clear, even in the City of Los Angeles alone, that gap is enormous, as illustrated by this graph:

Citing a study by UCLA’s Luskin Center for Innovation, Kinman reports that the rooftops just in LA alone could support some 5,500 MW of solar power—of which a paltry 68 MW is installed today. That is a lot of potential. But Kinman’s report doesn’t focus on adding all of that—rather she has documented dramatic benefits that would follow from just reaching the goal of 1,200 MW by 2020. 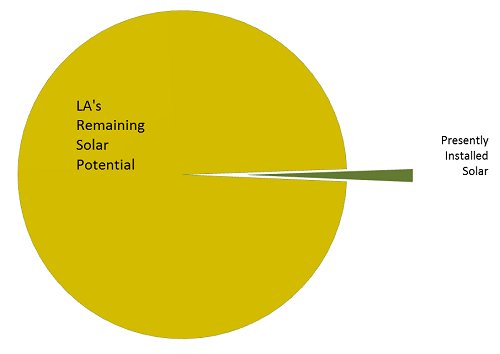 In addition to supporting some 32,000 job-years of employment, Kinman shows that installing that much solar would also have these benefits:

Kinman insists that this is an achievable goal, but one that would take “clear, strong and consistent direction and support” from the Mayor and the City Council to LADWP.  Some specific policy prescriptions include:

If we have one criticism of the report it is that it fails to identify funding sources—other than anticipated savings—to spur this growth.  For example, providing additional incentives for residential solar or expanding the FiT will come with a price tag.  Who is going to put up that money? At a time when solar is under attack from investor-owned utilities for unduly shifting costs onto non-solar customers, the report misses an opportunity by failing to outline a mechanism to pay for its important goals.

Still, the report provides valuable documentation of the as yet unrealized benefits of tapping into LA’s solar potential; and in that it makes an important contribution to the ongoing policy debate.

The original article was posted on the Run on Sun blog.