When President Obama was voted in he promised to expand renewable energy in the US and to reduce the costs of solar power to compete competitively without subsidies. One of those efforts was the Department of Energy’s decade-long SunShot Initiative launched in 2011. Now, just five years into the program, it’s already reached 90 percent of its goals, so it set new goals for 2030. 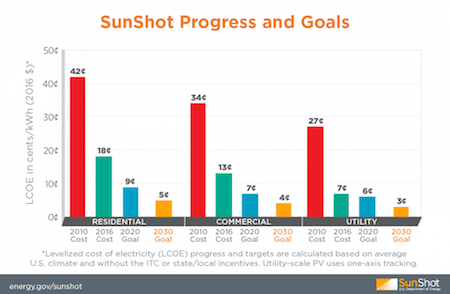 "Both SunShot and the solar industry have made major strides to reduce costs for innovative technologies which resulted in dramatic market growth and the creation of hundreds of thousands of American jobs," said Acting Assistant Secretary David Friedman. "These new goals and funding will further push down costs, save American consumers and businesses money, and create even more jobs."

To support the SunShot goals the DOE announced up to $65 million of new investments to further drive down the cost of solar while speeding deployment. The funds are subject to appropriations by Congress.