The residential solar industry is growing at breakneck speed across the US and now the energy storage market is following it quickly. To capitalize on that opportunity Sunrun announced it is offering BrightBox batteries to supplement home and business solar systems in California, the nation’s largest solar market.

Sunrun initially released the BrightBox system for sale at big box stores in Hawaii. Hawaii served as a prime testing market for BrightBox given that its small isolated power infrastructure allows for more extensive experimentation and analysis of how new solar technologies interacts with the grid. 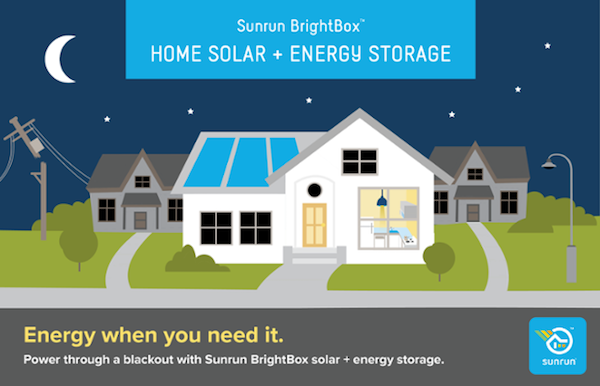 “Building on the successful launch of BrightBox in Hawaii, we are thrilled to offer Sunrun BrightBox to California homeowners who’ve been the leaders in adopting clean energy at scale,” said Lynn Jurich, Chief Executive Officer of Sunrun. “We will continue to innovate and deploy services that will further help our customers obtain smarter energy options to ensure they enjoy the comfortable homes they deserve at lower energy costs. Importantly, with innovations such as BrightBox, we hope to forge new relationships with utilities as we work with them to maximize the value of solar energy in modernizing America’s energy infrastructure.”

As California utilities shift to time-of-use pay structures, a system like the BrightBox can add value by allowing customers to save on peak hour rates. During peak hours the homeowner can utilize solar power and energy stored in batteries rather than the power from the grid.

“By bringing Sunrun BrightBox to California, we are offering our customers a customized solar plus energy storage solution that provides clean, affordable energy with backup power when you need it,” commented Michael Grasso, Chief Marketing Officer of Sunrun. “The backup capability ensures you will have several hours of power for important appliances and electronics even when your local electricity grid goes down.”