Last week was a good one for the solar and renewable energy industries. For instance, The Solar Foundation announced that 2 percent of all new jobs in the country were in the solar industry. That growth comes at the same time as US consumers are seeing the lowest energy costs ever, thanks to renewables.

The Solar Foundation issued its National Solar Jobs Census last week, finding that 1 out of every 50 new jobs in the US in 2016 were in the solar power industry. It added 51,000 jobs last year, reaching a total of 260,077 people employed across the country. 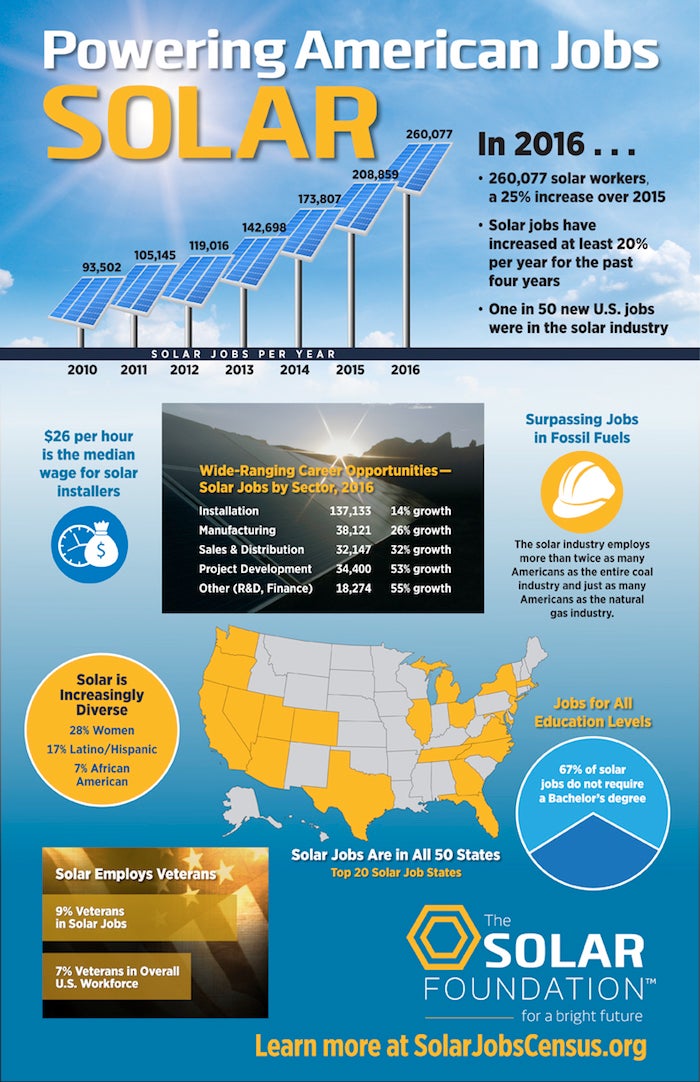 Last week Bloomberg New Energy Finance released its 2017 Sustainable Energy in America Factbook, which showed that for the first time US consumer spending fell to less than 4 percent. The report attributed the drop in prices to energy efficiency, renewable energy and natural gas.

Another new study out last week found that large energy companies that are undervaluing the continually falling costs of renewable energy, which could result in losses for them. The new study, Expect the Unexpected, from the Grantham Institute and the Carbon Tracker Initiative, showed that growth in renewable energy and clean transportation technologies could halt growth in global demand for oil and coal as soon as 2020. But it also showed that energy companies aren’t expecting coal or oil to peak until at least 2030.

Perhaps such companies have the ear of Rep. Matt Gaetz, R-Florida. Gaetz introduced H.R.861, a resolution with the title and goal of “To Terminate the Environmental Protection Agency.” While the resolution isn’t expected to pass, it shows how some legislators are ready to attack everything that’s helped renewable energy grow.

The latest sign that residential solar ins’t going anywhere either, came from Mosaic. That company just announced its first securitization of residential solar loans. The securities the company sold will allow it to raise lower-cost capital to help reduce the cost of its solar installations in the future.