Last week Tesla unveiled what it says is its new rooftop solar panel system—not its new solar roof—but a more conventional system. Meanwhile as Chicago committed to powering all its municipal buildings with renewable energy, California’s electric grid got more than 50 percent of its electricity from solar power, resulting in wholesale electric prices below zero cents per kilowatt hour.

As the integration between Tesla and SolarCity continues Tesla is adding more energy options to its site. Last week it quietly added a solar section to its energy channel. The new section highlights what a low-profile rooftop solar panel array that fits closer to a roof with dark photovoltaic (PV) panels, and sleek edges around the solar, allowing them to look more integrated into roof. This still isn’t the company’s solar roof, in which PV cells are integrated directly into roofing materials, but is the company’s next step in rooftop solar. 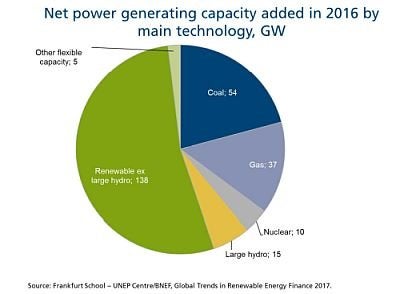 The Energy Information Administration (EIA) reported that in March California’s electric grid likely saw the amount of solar power on its electric grid rise to more than 50 percent of all the power on the grid. While puppies didn’t fall out of the sky or the system experience any brownouts despite the high level of solar on the grid, it did have some interesting side effects, like wholesale electric power became cheaper than 0 cents per kilowatt hour because certain power plants couldn’t be turned off entirely and were producing energy that wasn’t needed on the grid at the time.

Chicago, the Windy City, announced that by 2025 all of its municipal buildings would be powered by renewables. That’s 900 buildings throughout the city that will be powered by solar, wind or other renewable sources in less than a decade. It also represents about 8 percent of all the electricity used in the city.

As part of its latest effort to save money Walmart is adding energy storage to 27 stores in Southern California. The 40 megawatt hours of energy storage systems it’s adding to these stores builds on the massive company’s efforts to source all of its power through renewables with on and off-site renewable energy generation. The new energy storage systems also will allow the local stores to act as a balancing battery for the grid, they can dispatch energy to the grid when its needed or prices are highest for electricity.

Toyota’s new, highly energy efficient US headquarters isn’t even open yet. But already the auto manufacturer is expanding the amount of solar panels that will power it. Last week the company and SunPower announced it was expanding the arrays on campus to 8.8 megawatts, up from 7.8 MWs as originally planned.