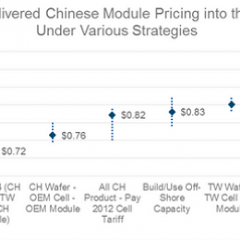 A new report out from GTM Research The 2014 U.S. China Solar Trade Dispute: Status, Strategies and Market Impacts looks into the overall effect of the U.S. Commerce Department’s (DOC) June 2 ruling imposing new tariffs on imports of Chinese PV modules. The new report finds that, on average the cost of Chinese PV are likely to increase by 14 percent because of the tariffs.

The report said that overall 31 percent of solar modules installed in the U.S. in 2013 were from China. For residential solar it was a much higher percentage, at 50 percent. While cost increases will likely be felt by homeowners choosing to go solar—the report observed that utility-scale projects suffer the most. “GTM Research expects some projects to seek alternate module suppliers, while others may fail entirely,” the company said. 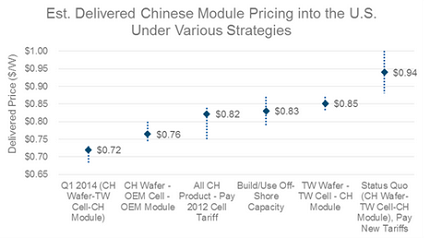 “Whereas the 2012 trade case ruling caused almost all Chinese firms to respond with the uniform strategy of using Taiwanese cells while maintaining the other PV value chain steps (wafer, ingot, module) in China, the current scope of the 2014 case will likely result in a variety of strategies adopted by Chinese module vendors to continue serving the U.S. solar market,” said Shyam Mehta, Lead Upstream Analyst at GTM Research and co-author of the report. “While the strategies vary, one constant remains across all scenarios: pricing for Chinese modules shipped to the U.S. is highly likely to increase starting in July 2014. Consequently, the primary competitive advantage of Chinese suppliers in the U.S. market -- lower pricing by as much as 25 percent historically -- could be greatly diminished.”

This could impact the larger solar industry. Particularly residential and commercial solar installers. “Today’s GTM Research report puts hard numbers behind a truth that U.S. solar companies already understood – new tariffs from the Department of Commerce are raising the price of solar power and are bad for the American solar industry,” said Coalition for Affordable Solar Energy (CASE) President Jigar Shah. “The DOC’s trade determination threatens thousands of jobs in installation, manufacturing, project development, and other sectors of the industry, and makes solar less competitive with non-renewable sources of electricity.”

“Unless the Department of Commerce revises the scope prior to its final determination, there is no question that tariffs imposed in this case will have a larger impact than those already in place from the 2012 ruling,” said Shayle Kann, Senior Vice President at GTM Research and the report’s co-author. “SolarCity, for example, has already announced a 100-megawatt supply deal with REC Group, while RGS Energy has done the same with SolarWorld. This portends a broader shift in the pricing and competitive landscape for U.S. solar module supply as a result of the preliminary countervailing duty decision on June 2.”

“This is surely not the result sought by an Administration that has championed the growth of the American solar industry and recently re-installed solar panels on the White House,” Shah contended. “The Obama Administration has to take a more active role in settling this dispute, which is still ongoing as further tariff determinations are scheduled for the coming months.”