As SunPower prepares to install its 10,000th residential system, the company says that it anticipates that solar will be on 20 percent of all new homes built in California this year. That’s based on recent trends, like the doubling of solar on new homes between 2011 and 2012, renewed efforts through the California Solar Initiative (CSI) under the New Solar Homes Partnership, and at least two municipalities in California that have revised their building codes to require solar on all new homes.

CSI data shows that 4,000 new homes were built with solar in California last year. SunPower observes that that’s 10 times the number built in 2006, when the housing construction market was booming. But back then solar was much more expensive, there were few if any residential solar leasing programs, and the CSI and its parent program the Go Solar California campaign were being implemented. 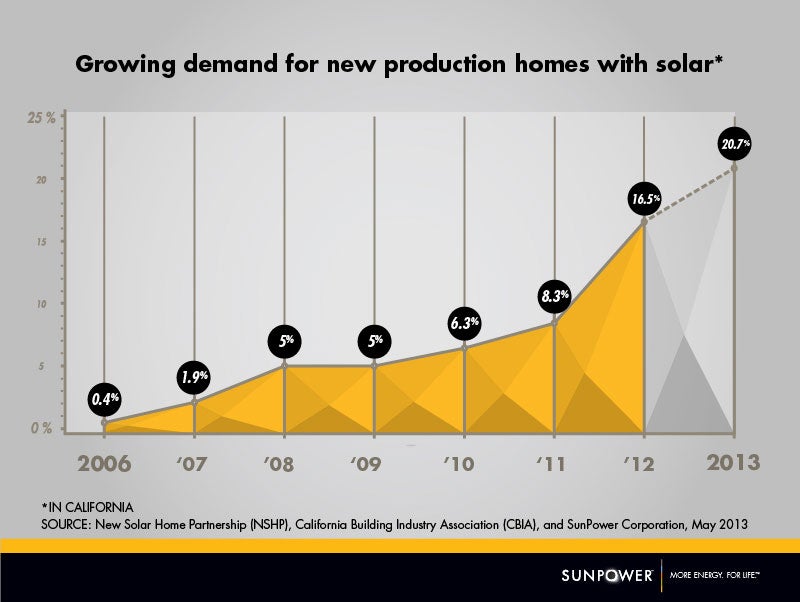 Since then a number of important advances like the reduction of PV costs have happened, leasing options have bloomed and companies like SunPower, a vertically integrated PV manufacturer and installer have forged partnerships with new home builders like KB Home, Richmond American Homes, Lennar and Pulte.

Solar is proving to be an increasing draw for these home manufacturers to draw new customers. “In all of our communities that marketed solar, any community that had solar 30 percent more interest than communities that did not,” says Steve Ruffner KB Home president of Southern California.

While previously some realtors thought solar could reduce the value of a home, newer evidence shows that solar adds resale value to homes in California. For instance, a 2011 study by the Lawrence Berkeley Laboratory, which looked the sale of 72,000 homes in California, showed that solar added $17,000 to a home’s resale value. Considering that a PV system can cost $20,000 to $30,000—out-of-pocket—and starts reducing or eliminating electric bills immediately, a homeowner selling a home there could easily recoup the value of the installation through the added value of the PV array.

“In 2013, the housing market is picking up and you really see strong interest in the new Solar Homes Partnership,” says California Energy Commission Commissioner Andrew McAllister. “We want California businesses to thrive by installing solar, manufacturing solar and we’re really achieving that. Homeowners, business owners and our population at large, really are embracing solar as costs come down and as the value and the services that solar provides become obvious,” he contends.

Adding to this trend are two municipalities, Lancaster and Sebastpool, which passed zoning ordinances in 2013 requiring all new homes to have solar. All this taken together means the percentage of homes in California (particularly new homes) with solar will continue to increase this year. “By the end of this year, we expect one of every five new production homes in California will be solar powered,” says SunPower CEO Tom Werner.