Together, solar and wind power now employ 366,000 workers across the US showing they are becoming an increasingly large sector of the US’s energy employment. Today (Jan. 13) the Department of Energy released its 2017 U.S. Energy and Employment Report (USEER) tracking what sectors of the energy industry are employing workers.

Meanwhile, wind power is now employing more than 102,000 people across the country. That’s a growth rate of 32 percent over the findings in previous years’ USEER—solar sector employment grew by 25 percent.

The wind energy industry celebrated the results. “Wind means opportunity and job security for over 100,000 Americans,” said Tom Kiernan, CEO of the American Wind Energy Association. “Wind workers directly contribute to our nation’s energy independence and economic success story. We’re especially proud of helping America’s veterans find well-paying jobs after their service, employing them at a rate that is 50 percent higher than the national average.”

However, AWEA also noted that the industry is ready to supply significantly more jobs in the US. Referring to the DOE’s recent wind vision report, AWEA said wind power could provide 380,000 jobs in the US by 2030. 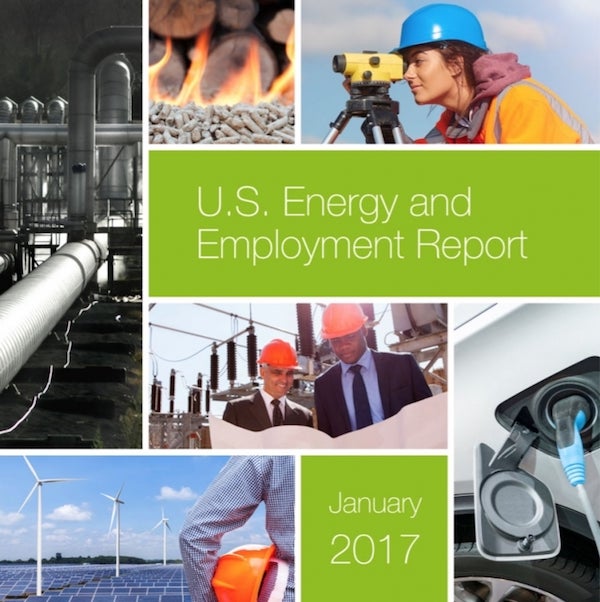 Overall the energy sector, from coal and gas to nuclear, renewables and energy efficiency, added more than 300,000 jobs across the US in 2016. That represents 14 percent of jobs added to the US economy in 2016. With solar adding 73,000 new jobs and wind adding 25,000 new jobs, the two renewable industries added roughly a third of the new jobs in the energy industry alone.

“This report verifies the dynamic role that our energy technologies and infrastructure play in a 21st-century economy,” said DOE Senior Advisor on Industrial and Economic Policy David Foster. “Whether producing natural gas or solar power at increasingly lower prices or reducing our consumption of energy through smart grids and fuel efficient vehicles, energy innovation is proving itself as the important driver of economic growth in America.”

The report looked at four different sectors of jobs in the energy sector. They include electric power generation and fuels; transmission, wholesale distribution, and storage; energy efficiency and motor vehicles. Of the electric generation and fuels sector, where wind and solar are producing most of their jobs, 800,000 of the 1.9 million workers contribute to the production of low-carbon electricity.