Massachusetts is one of the US’s leading solar states thanks to continually evolving solar policies that have kept expanding over the years. The newest iteration of solar incentives, under the Solar Massachusetts Renewable Target (SMART) program, could be a step back particularly for low-income communities in the state solar and low-income advocates warn.

MassSolar, solar advocates, environmental experts, and nonprofit organizations are expressing concern that the SMART program could be disastrous for efforts to expand solar power among low-income communities in the state. They argued that the savings that can accrue from solar power can benefit such people the most. 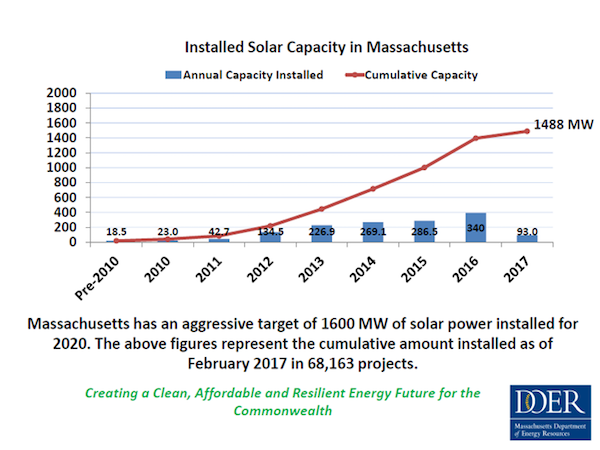 "MassSolar works to expand access to solar for everyone in the Commonwealth, including low-income communities. We are concerned that the SMART program as currently proposed, may impose administrative hurdles and set compensation rates so low that continued development of low-income solar will become impossible. We need to make it easier, not harder for low-income communities to go solar,” said Mark Sandeen, co-founder and president of MassSolar.

The organizations praised the work the Massachusetts Department of Energy Resources (DOER) has done to develop the new program. But they remained concerned about the lack of support for low-income solar, which Gov. Baker’s administration has said it supports.

"Homeowners, tenants and businesses throughout our neighborhood want to adopt solar power, both for the savings on their electric bill and for the chance to help fight climate change," said Gail Latimore, executive director of the Codman Square Neighborhood Development Corporation in Dorchester. The organization is developing community solar projects on 18 of its buildings through its Eco-Innovation District Initiative. "SMART could be a positive development for solar, but without a program that expands sharing and offers a fair compensation for solar production, many in our communities, especially the low income tenants we serve, will be left behind by the solar revolution."

"Solar energy is helping us clean up our air and water and fight climate change, and all of us stand to benefit when everyone in Massachusetts has the opportunity to switch to solar," said Ben Hellerstein, state director of Environment Massachusetts. "But the devil's in the details. Access to solar for low-income communities will be severely limited if the Baker Administration doesn't fix shortcomings in the SMART program. We urge the Administration to fix SMART to help put renewable energy within reach for all Massachusetts residents.”