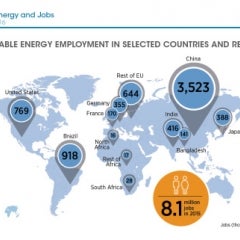 Of the 8.1 million people who work in renewable energy worldwide more 2.8 million work in solar photovoltaics than in any other renewable energy industry. That’s according to a new report from International Renewable Energy Energy Agency (IRENA). The new report showed that renewable energy jobs are on the rise, increasing about 5 percent across the globe, in 2015.

The solar industry saw an increase to 2.8 million in 2015 from 2.5 million in IRENA’s last count, the agency said. Such jobs included manufacturing, installation and operations & maintenance. The other leaders were liquid biofuels, which employed 1.7 million, and wind, which grew 5 percent to reach 1.1 million global jobs. It’s the latest report from the agency, which also recently produced a report showing that renewable energy can save the world trillions of dollars by 2030. 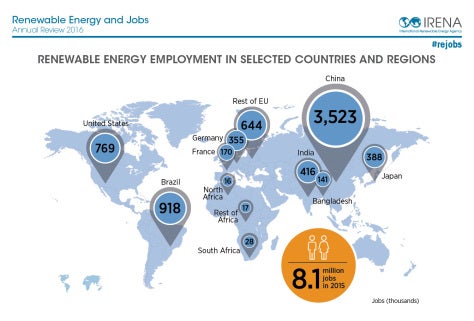 “This increase is being driven by declining renewable energy technology costs and enabling policy frameworks. We expect this trend to continue as the business case for renewables strengthens and as countries move to achieve their climate targets agreed in Paris,” said IRENA director-general Adnan Amin.

The numbers are even more impressive considering that the overall energy industry saw jobs decline in 2015. The new report, Renewable Energy and Jobs – Annual Review 2016, showed that oil and gas jobs in the U.S., for example, fell 18 percent in 2015, while renewable energy jobs grew by 6 percent. “Solar employment grew 22 percent—12 times faster than job creation in the US economy—surpassing jobs in oil and gas. Employment in wind industry grew 21 percent,” the report found.

In China more people were employed by renewable energy (3.5 million) than by oil and gas (2.6 million). China also was the global leader in overall renewable energy jobs. In addition to China and the U.S. other renewable energy job leaders included Brazil, India, Japan and Germany. Renewable energy jobs are also growing in Africa, according to IRENA, which noted new wind and solar projects are providing more employment opportunities in Egypt, Morocco, Kenya and South Africa.

Another interesting finding from the report is that renewable energy industries support more jobs for women across the world than the broader energy sector.

Although it didn’t include large hydropower in its findings, IRENA also noted that the industry employees 1.3 million more people.