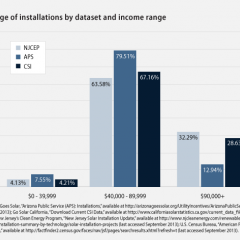 Today (June 13) Forbes published a piece that falls largely among talking points supported by utilities and fossil fuel energy companies that attacks net-metering as a policy that puts a burden on poorer people. It’s basically hogwash.

The opinion piece by Monica Martinez contends that net-metering policies are “are now having a detrimental impact on groups who can’t afford solar and are faced with higher electricity bills as a result of these policies.” Net-metering is one of the policies that has actually made it easier for people of all income levels to go solar—if they choose to do so.

Net-metering policies actually help people who choose to go solar reap a return on their investment either in terms of getting money back for providing power to the grid when they don’t use it at home or by getting a credit for the power sent back to the power grid on their energy bill. Either way it makes solar power pay for itself much quicker than it would otherwise and while the utilities might have to purchase the power at prices higher than what they pay for the wholesale electric they use, solar produces most during peak hours when energy use is highest, forcing utilities to rely on power from “peaker” plants which often cost more to run than other power plants. Solar helps alleviate those costs. 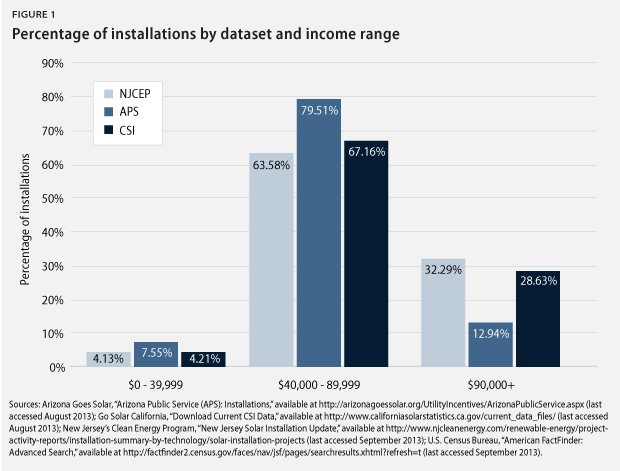 Also, states with net-metering policies are more likely to offer third-party financing options and loans, often with zero-down payments for solar power. Regarding Martinez’ mention that these options often require higher credit scores—that may be true. Some companies require credit scores of 600 or more for their third-party products and loans, but a high credit score isn’t the exclusive province of the rich. It just means financially responsible.

In fact, looking at the numbers the majority of households that choose to go solar across the U.S. are middle income families. As early as 2011 Sunrun published research showing that neighborhoods with lower-incomes were adding solar quicker than better off neighborhoods, and pretty much everyone wants more solar power. More recently the Center for American Progress (CAP) published research showing that the overwhelming majority of homeowners going solar across the country—particularly in three of the largest markets for solar—were middle income families and the majority of those were closer to the lower range.

“Through our analysis of solar installation data from Arizona, California, and New Jersey, we found that these installations are overwhelmingly occurring in middle-class neighborhoods that have median incomes ranging from $40,000 to $90,000,” CAP said. “The areas that experienced the most growth from 2011 to 2012 had median incomes ranging from $40,000 to $50,000 in both Arizona and California and $30,000 to $40,000 in New Jersey. Additionally, the distribution of solar installations in these states aligns closely with the population distribution across income levels.”

CAP continued: “Many within the electric utility industry have claimed that distributed solar is mainly being adopted by wealthy customers. Concerned by the threat that rooftop solar’s rapid growth poses to traditional utility business models, some utility executives have used this claim to support a rising desire within the industry to alter existing solar programs and policies. The idea is that through solar policies such as net metering, middle- and low-income customers who cannot afford to go solar are subsidizing the wealthy customers who can.” This seems to follow the reasoning used by Martinez.

While Martinez contended that net-metering (NEM) solar power adds cost to utility bills it should also be noted that so does any new generation source, whether it’s a new nuclear power plant, coal-fired power plant, solar farm or solar rooftop. But others, like Crossborder Energy have found that the ancillary benefits of solar outweigh additional costs associated with it. “The net annual benefits of NEM for the non-participating residential customers of the IOUs will be $2.1 million per year when the 5 percent NEM cap is reached,” Crossborder said in a January 2013 study of the California market.

Solar also produces ancillary benefits, like cleaner air, which depending on how the new EPA air emission standards are enacted, could make solar cheaper in comparison to carbon-emitting power sources. And few industries have produced as many jobs as quickly as the solar industry has in the past few years, which means that it’s also helping some of those poorer families get a better leg up.