by Chris Meehan on 06/15/2016 in Photovoltaic Technology, Solar Cells

Creating a more efficient—and cheaper—solar photovoltaic (PV) device is a holy grail of sorts. One of the most promising low-cost technologies are perovskite crystals. Since December 2015 at least two organizations have created perovskite crystal solar devices that are more than 20 percent efficient, which puts them well within range of silicon and thin-film solar panels. Now Swiss researchers at Ecole Polytechnique Fédérale de Lausanne (EPFL) theorize that a hybrid perovskite and silicon solar device could reach 44 percent efficiency.

To better understand how quickly perovskite solar cells are improving in performance, consider this when the National Renewable Energy Laboratory started tracking their efficiency in 2013 they were roughly over 13.6 percent efficient. As of March 2016 researchers at KRICT and UNIST in Korea produced a 22.1 percent efficient device. Single-crystal silicon-based PV was roughly 13 percent efficient in the 1970s. It took until roughly 1994 for it to reach 22 percent efficiency. 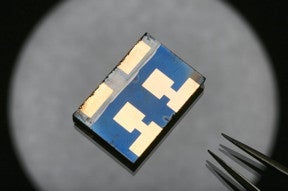 In Switzerland at EFPL Michael Graetzel created a larger-size perovskite solar cells that was more than 20 percent efficient at converting sunlight into electricity, the highest performance ever measured for such a device. They were able to create the device using a new vacuum flash technique. The technique removes liquids from a special ink compound and begins seeding the perovskite crystals.

The research center cautioned that the lower prices and increased efficiency isn’t a harbinger of doom for silicon PV. “Safety issues still need to be addressed regarding the lead content of current perovskite solar-cell prototypes in addition to determining the stability of actual devices,” EPFL stated.

“Layering perovskites on top of silicon to make hybrid solar panels may actually boost the silicon solar-cell industry. Efficiency could exceed 30 percent, with the theoretical limit being around 44 percent,” EPFL said. “The improved performance would come from harnessing more solar energy: the higher energy light would be absorbed by the perovskite top layer, while lower energy sunlight passing through the perovskite would be absorbed by the silicon layer.”