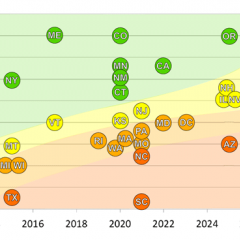 Solar Power Rocks, which tracks state solar incentives and rebates for homeowners across the U.S., released its 2015 Solar Power Rankings earlier this week. While some of the top 10 states were previously in Solar Power Rocks’ rankings for 2014, the list saw some significant changes as incentives in some states dried up and other states increased their solar incentive offerings, including renewable portfolio standards (RPSs). Each state could receive up to 5 points in the rankings. New York topped the list with 4.4 out of 5 points.

The most significant movers were Connecticut and Minnesota. Connecticut moved up a total of 10 spots to third in the rankings. Meanwhile Minnesota a total of 14 spots in Solar Power Rocks’ rankings. In its rankings it said that Minnesota was the biggest gainer because “Incentives are still good…and Minnesota’s RPS and solar carve-out are some of the best in the nation. Way to go, North Star!” That's despite the state's largest utility transitioning from a solar rebate program to a performance payment. 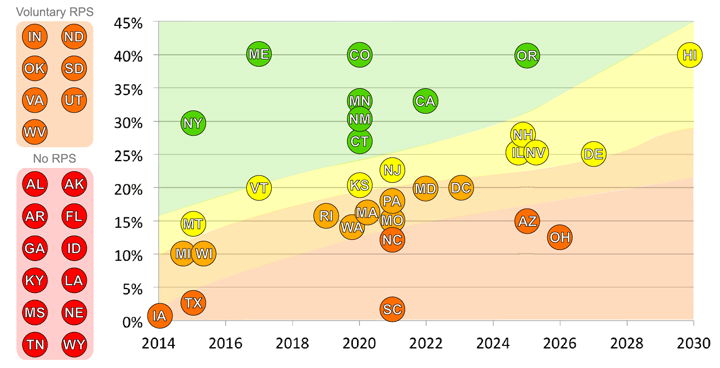 Connecticut, which has some of the highest average electric costs in the country also significantly boosted placement in the rankings this year. “Connecticut is a perfect sun-storm of high electricity prices, a great RPS and accessibility laws, and a HUGE solar rebate. It’s enough to rocket the state to near the top of the payback timeframe list, and enough to put it tops on our list, too.”

New York took the top spot this year supplanting Massachusetts, which took top honors in the previous rankings. “Simply put, New York is doing almost everything right. It all starts with the most aggressive RPS in the country, and a really great solar carve-out. A whole slew of rebates and tax incentives follow logically from the RPS goals. New York is the best around, and Governor Cuomo’s commitment to solar energy will keep the picture sweet for a long time to come.”

The organization said that it rejiggered its ranking system for 2015 to make sure that the state rankings take into account “not only how good of a deal getting into solar can be (and it is often a good deal), but also the strength of the underlying policy and the likelihood that the solar train will keep on a-rollin’ into the future.”

As part of its 2015 rankings the Solar Power Rocks team reviewed all RPS laws. “A state’s RPS is extremely important to solar policy because its requirements for renewable generation prompt utility companies to pay big fines for noncompliance, making them keen to offer rebates to their customers for installing solar and feeding it into the grid,” it said. State solar policies including RPSs were the most heavily weighted part of the equation in Solar Power Rock’s rankings, accounting for 20 percent of its rankings. Solar incentives—which included rebates, tax credits, sales and property tax exemptions, and performance payments—consisted of a cumulative 45 percent of the rankings.