There were 30 electric vehicles showcased at the 2017 New York International Auto Show and all are eligible for the state’s new $70 million Drive Clean Rebate program for EVs as Gov. Andrew Cuomo (D) was on hand to tell attendees. The state’s initiative includes rebates of up to $2,000 for those buying a new EV, plug-in hybrid electric car or hydrogen fuel cell car.

"As we work to reduce our state's carbon footprint and curb climate change, I encourage New Yorkers to consider electric vehicles and help take us a step closer to achieving our goal of reducing emissions 40 percent by 2030," Cuomo said. "Many of the cars showcased at this year's show support New York's commitment to provide a healthier, safer state for all, and I thank the Greater New York Auto Dealers Association for supporting new technologies that allow this industry to continue to grow, while advancing our efforts to protect our environment for future generations.” 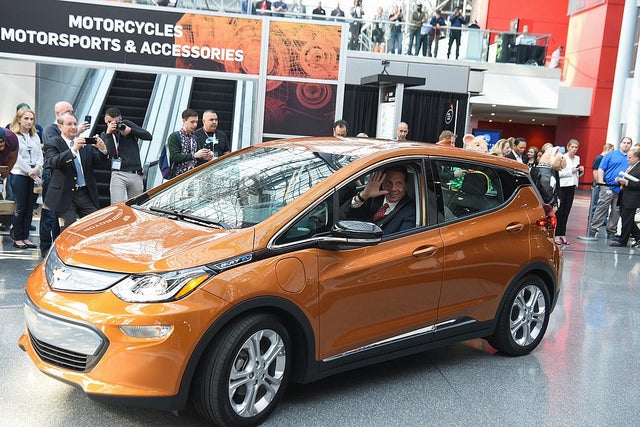 During his remarks at the event held at the Javits Center in New York City, Cuomo said: “We also have at this show this year a great parade of the new technology, the new invention, energy conservation. You’re going to see hybrid cars, all electric cars, hydrogen cars and that technology, that innovation is very important for the industry as well as the society,” he said. “The state of New York encourages it. We want to foster it and we are commencing a program of a $2,000 rebate on the purchase of a hybrid electric or hydrogen-powered car because we want to accelerate the transition into those vehicles so it’s something you should look at today.”

While EVs only accounted for 30 of the roughly 1,000 vehicles showcased at the auto show, it’s a huge step up in the number of commercially available electric vehicles. As recently as 2008, the idea of EVs becoming a a commercially viable vehicle seemed far off, now they’re drawing some the greatest attention as a way to reduce the cost of transportation from use in busses to delivery vehicles and high-end sports cars.

States like New York also see the increased use of EVs and hybrid vehicles as an important means of reducing emissions as the transportation sector is still a major producer of greenhouse gasses in the US. As more people and utilities transition to cleaner forms of electricity like solar power, EVs have a chance of reducing the amount of pollution even further. New York EVs cost about 50 percent to 70 percent less to operate per mile at the same time the Drive Clean initiative is expected to result in the reduction of 115,000 metric tons o carbon emissions being emitted annually. The equivalent of taking 24,000 cars off the road.

The Drive Clean initiative includes $55 million in vehicle rebates of up to $2,000 for EVs and similar vehicles. It also includes a $15 million awareness campaign to tout benefits of EVs, install more EV charging stations across the state, and develop new EV-enabling technologies.