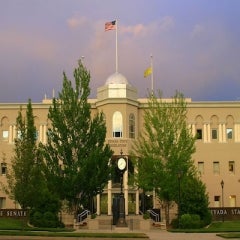 Solar advocates in Nevada are excited about the passage of revised Assembly Bill 405 through the State Assembly with a 38-2 vote. The bill would restore net-metering for every rooftop solar customer throughout the state and includes a “Solar Bill of Rights” provision.

The bill of rights protects customers from inaccurate public utility rates, minimum warranty requirements and will increase transparency of contract disclosure terms. The legislation must now pass the State Senate with a veto-proof majority or be signed by Gov. Brian Sandoval (R) to become law.

“Consumers are now effectively grandfathered into the rate structure they originally enrolled into for the life of their system. In conjunction with ensuring consumer disclosures, this bill creates the stability required for Nevadans to make educated investments in clean energy solutions,” said Travis Miller, director of The Great Basin Solar Coalition in Northern Nevada.

If the revised AB405 passes the State Senate, it would reinstate net-metering at 95 percent of the retail rate for excess solar generation. Under the revised bill, a new net-metering rate solution would be established, which uses a tiered calculation for solar-generated electricity based on the total rooftop installations in the state.

The state’s solar industry was devastated when the Public Utilities Commission of Nevada (PUCN) eliminated net-metering in December 2015, costing the solar industry nearly 3,000 jobs. The PUCN eventually reversed its decision and grandfathered 32,000 existing rooftop solar customers into their original contracts, but it had never established a plan for net-metering pong forward.

“Nevada has an opportunity to put itself back on top of the clean energy world and at the same time diversify our economy in a way that creates jobs for the hardworking families of Nevada. Restoring rooftop solar will mean more jobs for Nevadans and cleaner air and healthier communities,” said Andy Maggi, executive director, Nevada Conservation League. “We’re grateful for all the legislators working to make Nevada first in clean energy and conservation.”

Solar providers like Sunworks have already begun to comply with AB405 to reflect the legislation's modified rates and transparency mandates. “We believe the bill provides greater transparency for consumers and businesses and will enhance Nevada’s solar industry through a sensible rate structure and will lead to accelerated growth in solar-related jobs,” said Casey Coffman, Sunworks regional vice president of sales.