Massachusetts now has 250 megawatts of solar energy installed, according to Gov. Deval Patrick’s (D) office. It’s a significant number for such a small state, particularly a northeastern one, and even more significant because it means the state reached its goal—four years early.

As such, Patrick now wants to see more—significantly more. Upon announcing that the state met the threshold on May 1, the Patrick administration set an even more ambitious goal that would increase the state’s solar energy to 1.6 gigawatts—more than six times what installed in the state now, by the end of the decade. That’s like ripping off the rearview mirror in a rocket-ship. “When we set ambitious goals and invest in achieving them, Massachusetts wins,” Patrick said.

The jump to 250 megawatts of solar was significant. When Patrick assumed the governorship of Massachusetts in 2007 the commonwealth only had 3 megawatts of solar installed. Since then it’s increase 80 times, according to the office. And last year the price of residential solar energy fell, 28 percent—the second highest fall in costs in the U.S., according to the Solar Energy Industries Association (SEIA). 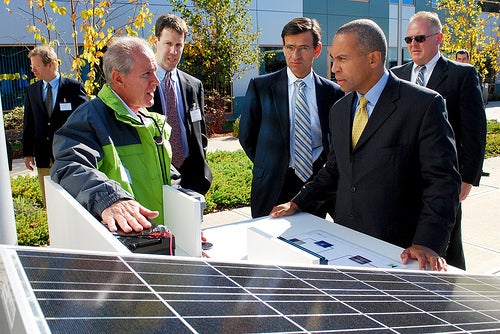 The growth hasn’t gone unnoticed. Earlier this year the SEIA ranked Massachusetts seventh among all states in the U.S. for the overall amount of solar installed in the state, which was at 198 megawatts at the end of 2012. It said the growth rate is among the fastest in the nation.

Upon hearing yesterday’s news, Carrie Cullen Hitt, senior vice president of state affairs at the SEIA, responded: “Governor Patrick should be commended as a solar champion. We thank him for his leadership. Based on the capabilities of the growing Massachusetts solar industry and the commonwealth’s solar potential, the new 1.6 gigawatt solar goal is great news.…By setting the bar higher for solar, Governor Patrick will help to build a robust, sustainable clean technology economy in Massachusetts for many years to come. We look forward to working with the Governor, the legislature and other stakeholders to move this initiative forward.”

The SEIA said that several important incentive programs have contributed to the growth of solar in Massachusetts, among them, Solarize Massachusetts, Commonwealth Solar Green Communities and Leading by Example. “These programs allow Massachusetts residents and businesses to leverage incentives to buy or lease solar power systems. Solar customers are also permitted to sell any unused power they generate back to an electric company,” the SEIA said.

To help reach the new targets, the state is already beginning to change its programs. Its renewable portfolio standard has a 400 megawatt solar carve-out program, which helped established the solar market there. “As that target approaches, state energy officials are fast-tracking revisions to expand the program,” Patrick’s administration said. It also attributed success to Patrick’s Green Communities Act in 2008, which established the Green Communities designation and a grant program that provides technical assistance and incentives to support solar development in communities.

The investments have led to jobs and economic growth. The Massachusetts Clean Energy Center’s 2012 Massachusetts Clean Energy Industry Report showed clean energy jobs grew an 11.2 percent clip between 2011 and 2012, the state said. It added that it spends billions annually on importing fossil-fuel based energy sources from South America, Canada and the Middle East. “That is lost economic opportunity that Massachusetts stands poised to reclaim through investments in home-grown renewable energy programs,” it said.