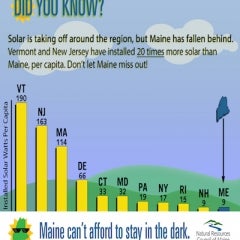 Maine’s pro-solar bill, Legislative Document (LD) 1504, passed a preliminary round of voting with unanimous support in the state’s Senate and 90 to 54 in the House. If signed into law, the bill would extend current net-metering until 2021 and increase the cap on the amoung of customers who can participate in a community solar project from 10 to 200. The bill now faces committee negotiations and overall approval. If passed by the legislature, it will need to garner two-thirds of the legislature’s support to override Gov. Paul LePage’s (R) expected veto.

“The legislature’s bipartisan votes for the solar bill are good news for Mainers. This common sense bill will help prevent the loss of solar jobs in Maine, save money for all Maine electricity customers, and allow more Mainers to benefit from this clean, local, renewable energy resource. The solar bill is especially needed to overturn the broken, anti-solar public utilities commission rule and increase access to community solar,” said Dylan Voorhees, clean energy director of the Natural Resources Council of Maine. 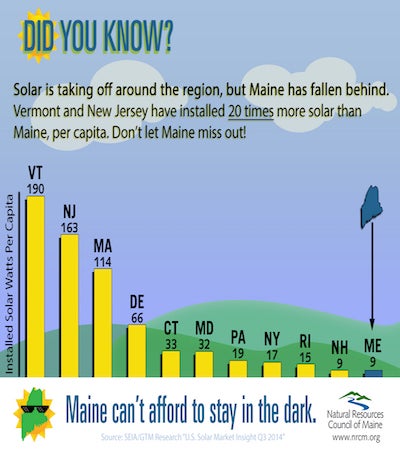 If passed, LD 1504 would overturn Maine’s Public Utilities Commission (PUC) attempt to change net-metering policy throughout the state. PUC planned to grandfather existing customers with net-metering agreements for the next 15 years at their current retail rates, while reducing reimbursement rates for customers who install rooftop solar after December 2017. Instead, the bill would extend current net-metering policies for rooftop solar until 2021 while new compensation billing structures are created by the PUC to reflect the value of rooftop arrays and electricity in relation to how installation benefits the grid.

“Unless the legislature acts, the PUC’s net metering rule, poised to take effect later this year, will increase costs for all ratepayers by incurring additional metering and billing system costs. The rule also includes an unprecedented tax on energy that homes or businesses consume onsite. It will require customers to pay utilities for power that never touches the electricity grid,” said Voorhees.

Development of community solar farms and rooftop solar would invigorate the state’s economy by creating an estimated 750 new solar jobs, especially in rural areas, according to Department of Energy employment modeling studies. “Maine has the fewest solar jobs per capita of any New England state. While other Republican governors recognize the value of solar, LaPage is out of touch: states with Republican governors have thousands of solar jobs,” added Voorhees.

LaPage opposed net-metering and increasing the state’s solar generating capacity when he vetoed LD 1649 in April 2016. The bill would have added 196 megawatts of solar to the state’s energy portfolio by 2021. In his veto letter LaPage said that expanding solar capacity and continuing current net-metering policies in the state passes costs of updating grid infrastructure to customers without solar and hurts the economy by increasing the cost of doing business in Maine.