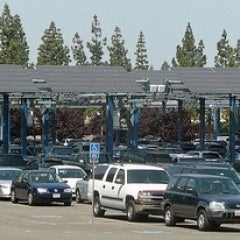 Yesterday (June 26) Demeter Power Group announced that it signed a Commitment to Action at the Clinton Global Initiative to launch its Feed-Out solar funding program for small-scale solar installations. The Commitment to Action pledges were signed by 100 organizations at the closing day of the show. The commitments are anticipated to create or fill 40,000 jobs as well as investing $215 million of new capital in small- and medium-sized enterprises.

In solar, a term usually mentioned when a solar array sends all its power to the grid and the utility pays the system owner a premium for the solar electricity produced. Demeter’s Feed-Out program tips it on its head. The company will finance or connect projects with financiers to provide solar canopies with electric vehicle chargers using property-assessed clean energy (PACE) financing. Then EV users who charge their vehicles in the spaces will pay for the electricity produced directly.

"The Feed-Out Program will bring together independent power producers and financiers to enable the lowest-cost, fixed-price offering for renewable energy,” said Michael Wallander, president of Demeter. “But unlike other similar 'feed-in-tariff' programs, the energy will be used on the customer-side of the meter."

The company is focussed on the small commercial market, including stores and apartments. "What retail tenant or business owner would not want to save money on their energy bills while offering customers and employees the ability to shade their cars and power up with solar energy? We enable funding for solar-powered carports with electric vehicle charging stations at a net-negative cost to the customer,” said Yann Brandt, executive vice president of development for Demeter.

Since the Feed-Out program relies on PACE financing at this point it is only available in Northern California areas that are taking part in the California FIRST PACE program. It’s the first place that’s partnered with Demeter’s PACE3P program. The company has developed the unique online portal with the help of a $500,000 SunShot Award. The platform connects property owners with solar developers to evaluate the viability of solar projects and can generate a term sheet to finance the deal.