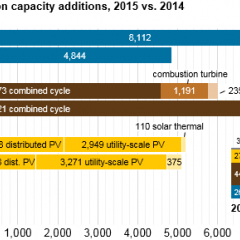 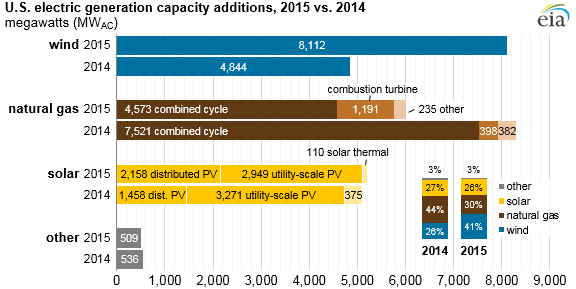 Except for solar power, EIA said the data reflected facilities with a net summer capacity of one megawatt and above. EIA started reporting data on rooftop solar power in 2015. “The data also show a record amount of distributed solar photovoltaic (PV) capacity was added on rooftops throughout the country in 2015,” EIA said.

As usual, California led the way in overall installations, according to EIA. “California added more than 1,000 MW each of utility-scale and distributed solar PV capacity, accounting for 42 percent of overall solar additions in 2015.” However, North Carolina was second and added 720 MW of utility-scale PV.

“Distributed PV saw significant growth in 2015, particularly in the residential sector, where total installed capacity rose much faster over the year than in the industrial or commercial sectors,” EIA said. “While still far behind top distributed solar PV states, several states saw notable growth in 2015, including Nevada, where distributed PV capacity more than doubled from 49 MW to 129 MW.”