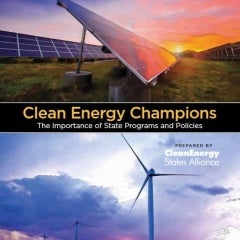 The U.S. now has more than 50,000 wind turbines and 650,000 solar installations, according to  according to Clean Energy Champions: The Importance of State Programs and Policies. State policy has a huge impact on the adoption of solar, wind, and other forms of clean energy in the U.S., the report, released June 22 by the Clean Energy States Alliance (CESA), found.

The report explored case studies from states across the U.S. to show how state-level policy more than federal policy has shaped the adoption of clean energy. The report also offers suggestions to help states continue to expand their use of renewable energy.

The report found that the amount of clean energy installations have sprinted far past annual estimates made by the Department of Energy’s Energy Information Administration (EIA). in 2014, for instance, wind energy produced more than 15 times more electricity than EIA projected for 2015, while solar produced nearly nine times more than EIA projected.

The EIA’s projections from 2000 anticipated that the U.S. would install about 5.2 gigawatts of clean energy by 2020. Since 2008, largely thanks to states’ renewable portfolio standards and other policies, the average amount of clean energy installed annually was more than 6 gigawatts—so for each of the last seven years clean energy growth has been more than EIA projected for a 20-year period.

“The clean energy industry is growing today in great part because states across the country have embraced clean energy and put in place beneficial programs and policies,” the report stated in the executive summary. “Without the states, there would not be nearly as much electricity generation from wind, solar, biomass, and other clean energy technologies.” The report contended that the federal government and private sector also had major roles in the expansion of clean energy over the last two decades, but reiterates that the states must stay strong in their roles.

“Over the past decade and a half, states across the country have implemented innovative policies that have achieved significant, measurable results,” said Warren Leon, executive director of CESA. “This report clearly outlines how renewable energy production has far surpassed expectations and created a thriving clean energy sector. We must sustain this momentum by supporting various initiatives at the state level, working in tandem with federal agencies, and advancing clean energy with continued bipartisan support.”

The report found that states can continue to innovate and increase the amounts of renewable energy being installed. It had seven recommendations, which include experimentation to help innovate within the local clean energy sectors to foster its growth and the growth of jobs. It also advocated that states strengthen consumer protections and addressing clean energy policy in a non-partisan manner. The report also had recommendations for the federal government, which included supporting research to assist states, using federal tax incentives to leverage state initiatives, and structuring EPA’s Clean Power Plan to support existing state clean energy initiatives.