by Chris Meehan on 06/22/2017 in Alternative Energy, Renewable Energy

In 2016 the world’s biggest banks invested $87 billion into extreme fossil fuels, which include tar sands, Arctic, and ultra-deepwater oil as well as coal mining and other efforts, helping speed climate change. While that’s 22 percent less than the $111 billion they invested in fossil fuels like coal and oil in 2015, environmental organizations, among them the Rainforest Action Network, are concerned that it’s not enough.

The network, along with BankTrack, Sierra Club and Oil Change International and others introduced their eighth annual report, Banking on Climate Change: Fossil Fuel Finance Report Card 2017 yesterday (June 21). The report observed that the reduction was a good step in the right direction, but cautioned that banks are still funding extreme fossil fuel projects at a rate that will push us beyond the 1.5 degrees climate change limit determined by the Paris Climate Agreement. It also stated that the drop off in funding fossil fuels must continue. 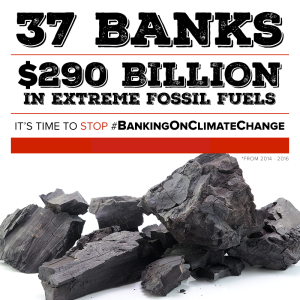 “Right now, the biggest Wall Street funder of extreme fossil fuels is JPMorgan Chase. In 2016 alone they poured $6.9 billion into the dirtiest fossil fuels on the planet,” said Lindsey Allen, executive director of Rainforest Action Network. “On Wall Street they are number one in tar sands oil, Arctic oil, ultra-deepwater oil, coal power and LNG export. Even in this bellwether year when overall funding has declined, Chase is funneling more and more cash into extreme fossil fuels. For a company that issues statements in favor of the Paris Climate Accord, they are failing to meet their publicly stated ambitions.”

"There is simply not enough time left for more excuse-making, more fiddling at the policy edges and more egregious bank investments in extreme infrastructure projects like pipelines that transport tar sands oil,” said Yann Louvel, BankTrack's climate and energy campaign coordinator said. “When we sit in meetings with bank staff, we hear of their revulsion to Trump's stance on climate change and of their support for clean investments, yet their actions of continued investments in extreme fossil fuels demonstrate that they actually side with the Trump approach. The climate and profit imperatives for banks can coincide when it comes to clean energy investing, but as they continue to prove with their shortsighted fossil fuel investments, they're at complete odds with the world's long-term climate targets."

“Movements like the Indigenous-led effort to Defund DAPL are rightfully pressuring banks to divest from infrastructure like the Dakota Access pipeline that puts profits before human rights and a livable future. It's up to us to resist these disastrous projects, push back on these fatal investments, and build the renewable energy solutions we need,” said Jenny Marienau, 350.org's US campaigns director.

The report observed that San Francisco, Seattle, WA and Davis, CA divested from Well Fargo last year, for instance. The report attributed their actions to funding DAPL as well as other misdeeds.

“The movement standing up to fossil fuel projects wherever they are proposed has gotten so large that these investments are now not only problematic from a climate and human rights perspective, but they’re also risky investments from an economic perspective too,” said David Turnbull, campaigns director at Oil Change International. “Our research has shown that any new fossil fuel development runs counter to our climate goals. If banks want to truly be leaders in their field, they need to stop ignoring climate risk and ensure their investments pass the climate test.”