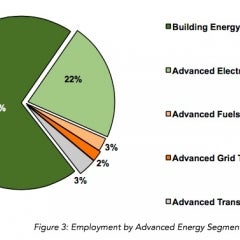 A new report, the "California Advanced Energy Employment Survey," from the Advanced Energy Economy shows that clean energy, like solar and wind, energy efficiency and some advanced fuels are providing 431,800 jobs in California—5 percent more than in 2013. That’s not all the good news for the Golden State’s clean energy industries—it’s slated for an increase of 17 percent or 70,000 more jobs in 2015.

“Now we also know that California is on the way to half a million people employed in the advanced energy industry by next year,” said Graham Richard, CEO of AEE and the AEE Institute. “Advanced energy companies are not only making California’s energy system better and cleaner. They are also creating jobs and contributing toward economic prosperity for the state.” 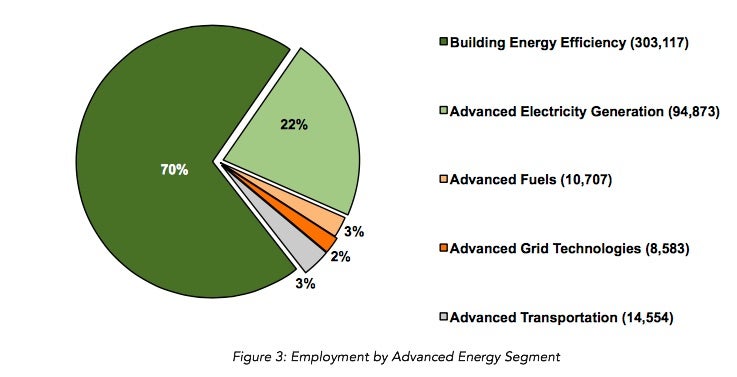 “California’s leadership on energy efficiency has spurred innovation across the state and has enabled companies to flourish,” said Alex Laskey, President of Opower. “There is a huge and growing opportunity in California for energy efficiency to have a positive impact on the environment, on households savings, and on job creation.”

Solar, however, was no slouch. The survey found that 73,000 are employed either full or part time in California’s solar industry. “Growth over the past 12 months has been particularly dramatic, with workers spending more than half their time on solar up 16 percent from last year,”  the survey found. The solar industry is also continuing to grow in the state even as its solar incentives dry up.

“For nearly 30 years, SunPower has been proud to call California our home, while developing innovative clean energy technologies and creating California jobs and economic opportunity,” said Howard Wenger, president of business units for SunPower. “The future of the advanced energy industry in California is bright, and we look forward to continuing our work providing clean and affordable energy solutions.”

The more than 430,000 employed throughout the advanced energy sector is more than many other industries in the state, which has 266,358 jobs in the motion picture, television, and radio industries and 28,966 in mining and quarrying industries. Still, it’s drop in the bucket in the nation’s most populous state, which had an estimated 38.3 million residents as of June 2013.