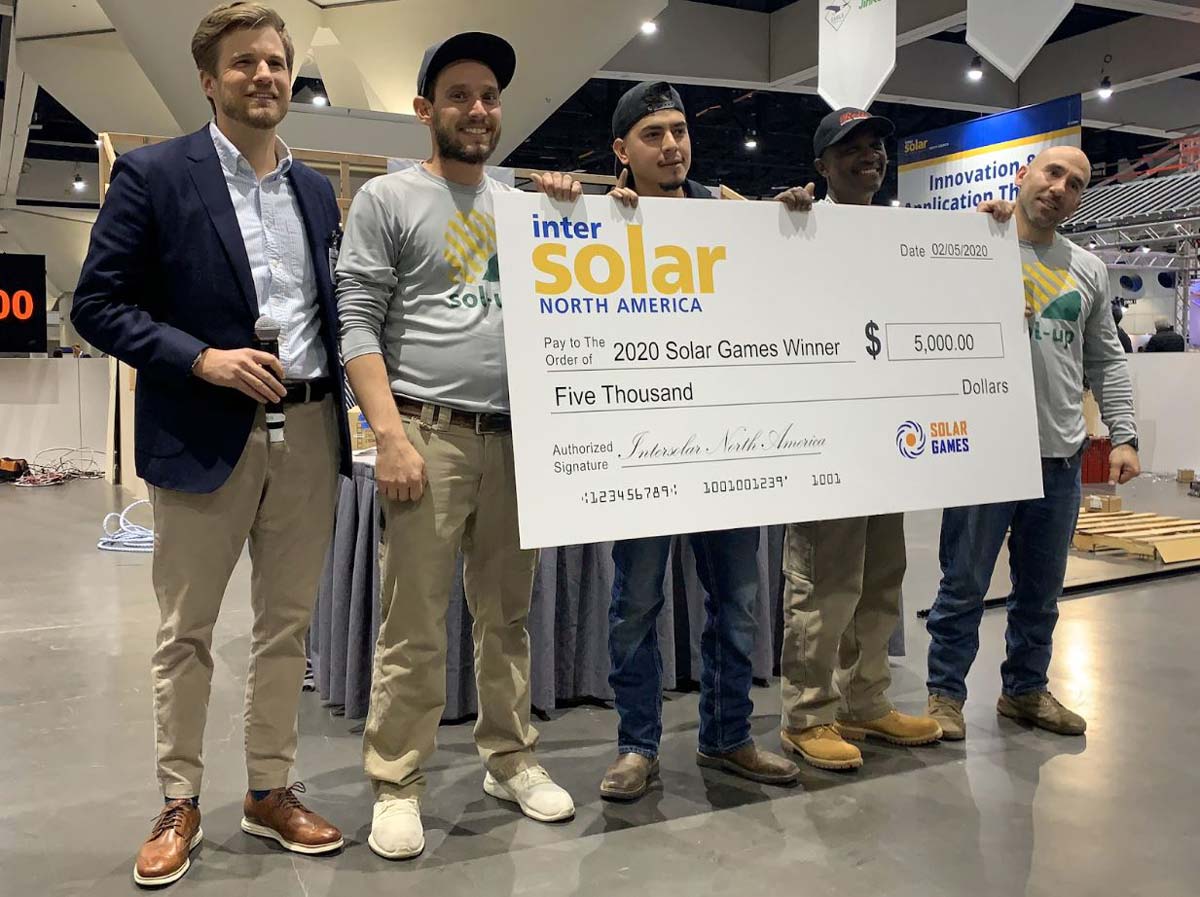 Installers competed for a $5,000 prize at the 2020 Solar Games. Image source: Twitter

The live competition event was designed to give conference-goers the chance to see the vital work that installers do, while adding a little friendly competition into the mix.

Before we jump into the game, here's a quick note on what exactly Intersolar North America is.

The conference allows companies and organizations to showcase the latest technologies and services in the solar industry. Intersolar also includes various workshops, talks, and presentations that allow attendees to get hands-on learning experience and an in-depth view of the solar industry.

What are the Intersolar Solar Games?

The Solar Games served as a competition between solar installation companies to see who could install a solar-plus-storage system the fastest, without sacrificing the quality or the safety of the installation.

Each installation company sent out teams of four to compete. The teams were judged on a 100-point scale based on three criteria: quality, safety, and speed.

The North American Board of Certified Energy Practitioners (NABCEP), ReVision Energy, the Institute of Building Technology and Safety, and Solar Energy International (SEI) all assisted Intersolar in creating the judging criteria for the Solar Games, as well as deciding which equipment and system types would be best for the competition.

All installers participating in the Solar Games received a free training course from Solar Energy International, prizes from Jinko Solar, safety gear, and conference passes for Intersolar 2021. But only one team could bring home the coveted first place prize of $5,000, and of course, the bragging rights, of winning the first-ever Solar Games.

Jim Callihan, the Director of Partnerships and Strategic Alliances at Intersolar North America, and one of the organizers of the Solar Games, said,

"As a new feature to the exhibition, it helped bring focus to a market segment that is very important to us...and that is installers."

Callihan continued, saying, "They are in the key position to help secure solar in the energy mix that will turn the tide on climate change as it relates to energy."

Rudy Saporite of the Institute of Building Technology and Safety served as this year's judge for the competition, with Roger Williams of Solar Energy International as the emcee for the event.

The Solar Games had a total of three rounds that saw competitors installing grid-tied and off-grid residential solar and storage systems while trying to get the best score possible.

Be the judge of your own solar installation! Enter your zip code to find out how much solar will cost for your home

The bleachers of the Intersolar Expo Hall filled with spectators waiting to see Sullivan Solar Power and Sol-Up USA go head to head. Each team had 90 minutes to install a 3.5 kW grid-tied solar-plus-storage system with Jinko Solar panels and a Tesla Powerwall battery.

Installers had to complete a solar-plus-storage installation in 90 minutes or less without sacrificing quality or safety in order to move onto the next round. Image source: Twitter

Sol-Up USA got a much lower score of 50 points for installing the racking unevenly. Despite the setback, this wasn’t the end of the game for Sol-Up.

Sol-Up and SunKey Energy were up for Round 2. Again, each team had to install a 3.5 kW grid-tied system with a Tesla Powerwall battery. Sol-Up had an advantage, having already installed this same system earlier in the day.

Round 2 ended up being a nail-biter with Sol-Up just barely eeking out a win with 89 points.

SunKey Energy trailed behind by a mere two points, with a total score of 87.

Sadly, this meant SunKey Energy was out of the running for the grand prize.

Find out how much solar panels can save you annually

Intersolar Solar Games: The final round

The Championship Round of the Solar Games took place the following day. This gave Sol-Up the opportunity to take on their Round 1 rival - Sullivan Solar Power.

Round 3’s installation was different than the previous two. Each team still had 90 minutes to complete a 3.5 kW solar-plus-storage installation. But this time, they had to install an off-grid system using a battery from Rolls Battery Engineering and MidNite Solar charge controllers.

It seemed as though Sol-Up USA was really looking to make up for their Round 1 loss. The Sol-Up team finished the installation in under 75 minutes, giving them 10 bonus points. Sullivan Solar Power took almost all 90 minutes, buzzing in just before time ran out.

Both teams installed the system almost exactly the same. They even made the same exact mistake when connecting the battery! They received an identical score of 89 points. But, Sol-Up’s speed bonus brought their score up to 99 points.

Despite a rocky start, the Las Vegas-based installer company took home the $5,000 cash prize. Plus, they got the honor of being the first-ever Intersolar Solar Games champions.

It’s no surprise, considering their SolarReviews rating is 4.96 stars.

Sol-Up USA comes out on top as the winners of the 2020 Intersolar Solar Games. Image source: Facebook

What’s even better is that the Solar Games donated all of the equipment used during the competition to Twende Solar. Twende Solar is a non-profit organization that provides renewable energy systems to energy-efficient communities throughout the world. The equipment from the Solar Games will be installed on a children’s home in Peru.

Jim Callihan summed up the outcome of the Solar Games by stating,

"We felt it was a huge success. Teams loved the competition, the stands were always full of curious onlookers, and equipment providers for both the on grid and off grid competition had great visibility."

He continued, "The Solar Games 2021...we hope to expand the competition, and in general, amp it up for everyone - installers and attendees."

Intersolar plans to have the Solar Games at next year’s conference, which will take place January 12-14, 2021 in Long Beach, California.

Let us calculate your payback period for a solar installation system

What are solar panels, how do they work? Solar panels use silicon solar cells to convert the sun’s energy into usable electricity through the photovoltaic effect.

The Tesla solar roof has changed over the years. What’s the latest solar roof news and is it worth the cost? The answer may surprise you!